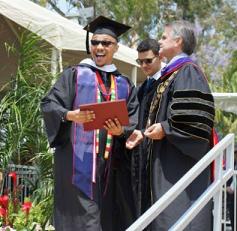 Being raised on skid-row with his family and finally finishing his last two years of his degree while living at Union Rescue mission, Chancey epitomizes the idea of starting from the bottom. Let his tenacity be your strength for your own struggles today! Persistence my friends, persistence!

“I climbed here bare-handed…And yes it was harder than most people who are given resources, parental support. But it’s not impossible.”

“We hear perpetuating stereotypes that homeless are mentally ill or mentally unstable, but there’s families on Skid Row, and there are families that need support,” Chancey told ABC7. “Sometimes it’s not that people don’t want to exit Skid Row, it’s people don’t have the means and the opportunity to.”